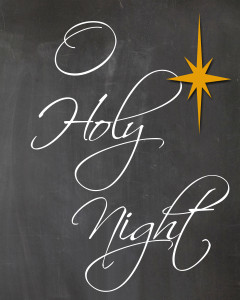 This month, my DEAR friend Carol Farrish and I have been teaching from some of the beloved Christmas Carols. The songs we hum almost instinctively. Ones we can belt out without looking at the words. The ones we tend to sing without pondering the rich meaning they contain. One of these songs is O Holy Night. It may be my favorite. Even as a child, I would listen repeatedly to Andy Williams sing it, to the point of causing my siblings to almost hate it.

O Holy Night was written by Placide Cappeau de Roquemaure, a Frenchman known more for his expertise in the areas of wine and poetry than his church attendance or pursuit of God. Yet, at the request of the local parish priest, he’d agreed to write a poem for the Christmas Eve mass. In a stage coach traveling to Paris, the song was written in one night as he pondered what it would have been like to be present that night:

“In those days Caesar Augustus… So Joseph also went up from the town of     Nazareth in Galilee to Judea, to Bethlehem the town of David. He went there to register with Mary,  who was pledged to be married to him and was expecting a child. While they were there,  the time came for  the Baby to be born, and she gave birth to her Firstborn, a Son.  She wrapped Him in cloths and placed Him in a manger, because there was no guest room available for them.

And there were shepherds… An angel of the Lord appeared to them, and the glory of the Lord shone around them, and they were terrified. But the angel said to them, ‘Do not be afraid. I bring you good news that will cause great joy for all the people. Today in the town of David a Savior has been born to you; He is the Messiah, the Lord. This will be a sign to you: You will find a Baby wrapped in cloths and lying in a manger.’

Suddenly a great company of the heavenly host appeared with the angel, praising God and saying, ‘Glory to God in the highest heaven, and on earth peace to those on whom His favor rests.’”          (Luke 2:1-14)

It was a very holy night. Holy beyond our knowing. Holiness came to earth, was wrapped in cloths and was laid in a manager. The One who formed our flesh took on flesh. All-Powerful took on the form of Most Vulnerable. Incomprehensible!

Yet that’s what holiness is – incomprehensible.

One does not define God.  The idea of holiness is at once understandable and elusive. Nevertheless, there is no term equal to the fullness inherent in holiness.  Holiness is what God is.  (from Baker’s Evangelical Dictionary of Biblical Theology)

To be holy is to be set apart, to be pure, to be WHOLE. How do we respond to such Holiness?

I’ve been pondering this question juxtaposed starkly against a definition of profanity from Elizabeth Elliott:

Two definitions representing vastly different responses to God. I’m not sure there’s anything in between.

Holiness not only came on that exceedingly holy night, holiness came in: “God has chosen to make known among the Gentiles that glorious riches of this mystery, which is Christ in you, the hope of glory” (Colossians 1:27).

Have I been remiss in believing that profanity isn’t a problem for me?

This You Tube video has been an incredible blessing to me: (If not a direct link, search Josh Groban and The Nativity Story movie. His singing is voiced over a scene from the movie.)