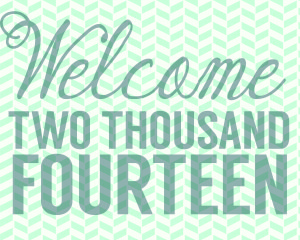 New Year’s Resolutions: Some years I would make them, some I wouldn’t. Rarely would I stick with them.

Yet, to resolve, to be resolute to do or not do the many things I felt kept me from being a “good” Christian – that’s something with which I am very familiar. And not just at the beginning of a new year. For years I would stress and fret over, carry great guilt over the many ways in which I felt I needed to do better.

Not this year. I’m entering this new year in a new way. I’m taking all the energy I put into trying to change and putting it into believing God.

My goals for 2014 could be summed up in four statements.

To believe that God is who He says He is.

To believe God will do what He says He will do.

To believe that I am a new creation in Christ.

To believe that He who began the good work in me will be faithful to complete it. 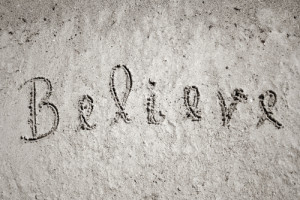 When I say believe, I mean to be void of all doubt.  To believe God is to have His truth determine what I think and how I feel. For it to shape how I act and react. The biggest blessings of all: the main thing we do to believe God is to BE with Him, to spend time in Gods’ word with the One called The Word.

This new approach doesn’t exclude the old and familiar resolutions, even the ones to improve our diet and exercise more. I’ve set one of those too. But this year I will work differently. Paul, in writing about His life mission and goal, spoke of the hard work and struggle he put forth. Yet he followed it with a disclaimer. He didn’t work in His own strength, but by depending on Christ’s mighty power that worked within him (Col. 1:29).

How do we access that power? God releases it in us as we believe.  I ended 2013 with a new favorite verse: “Does God pour out His Spirit and work miracles among you because you obey the law, or because you believe?” (Gal. 3:5).

It’s His will, His top two commandments, and He who called me to it is faithful. He will do it.