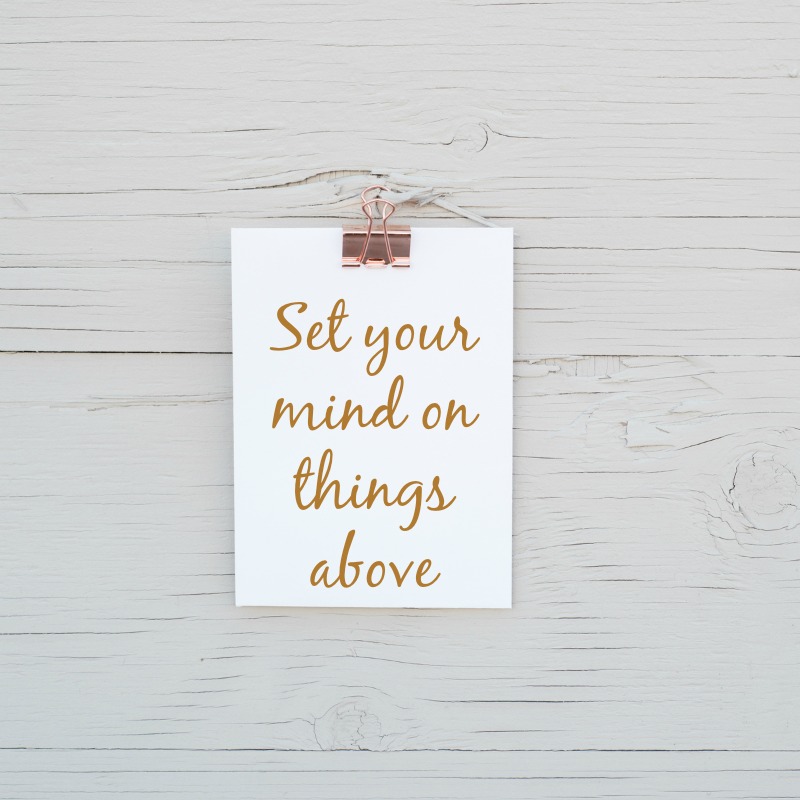 Sometimes it’s challenging to live a sold-out life for God. I really want to, but I struggle when the needs and desires of the present moment feel so important, so necessary, and sometimes, more appealing. I want to be that person who lives for God with absolutely no regard for themselves. I just wish doing it was as easy as wanting it. But it’s not. I believe we are all tempted and enticed by the things of this world. In fact, if Satan can distract us with the things of this world, he can keep us from ever living for the true purposes and plans of God.

In wrestling with these thoughts the other morning, I believe God clued me in on a big part of the solution:

Live with eternity in mind.

It wasn’t a new thought, but I sensed there was a clearer, deeper meaning He wanted me to get. Then I saw it in Scripture. Right in the middle of the Hall of Faith, Hebrews 11, the written account of spiritual ancestors who lived like I want to live, the:

The ones who “through faith conquered kingdoms, administered justice, shut the mouths of lions, quenched the fury of the flames and escaped the edge of the sword” (Hebrews 11:33-34).

The ones whose weaknesses turned into strength, who became powerful in battle and routed foreign armies. The brave ones who refused to be released from the suffering in order to live for the glory of God. They’re the ones of whom Scripture says, “The world was not worthy of them” (Hebrews 11:38).

While I don’t long for the suffering they endured, I long for the heart they had that endured it — the heart that refused to be released from it for the sake of God’s glory. I long to live equally abandoned to the purposes and will of God. And knowing that these men and women were not perfect, but were cowards, prostitutes, drunkards — people with all manner of struggles who were transformed by God — makes their faith even more appealing.

Scripture says they had one thing in common:

“They admitted that they were aliens and strangers on the earth. They were longing for a better country — a heavenly one. They were looking forward to the city with foundations whose architect and builder is God” (Hebrews11:10,12,16).

They lived with heaven in mind.

They had an eternal perspective, an eternal hope. They quit living for this temporal world. They didn’t look for this life to be the “end all, be all,” and instead longed for the next life. And here’s the amazing fact — they lived very exciting lives. They were free to seize all God had for them because they weren’t trying to squeeze out every pleasure, accomplishment and felt need that many of us wrongly believe can only be found in this life.

They believed heaven was incomparably better, and they stored up — paid forward — and prepared for that day and time instead of living, as many of us are prone to do, for today.

I wonder if many of us think heaven really isn’t better. Do we think it will be boring, that we’ll have a passive existence that doesn’t hold the opportunities and adventures we have around us now? I believe Scripture paints a very different picture. It tells of a hustling and bustling city, one with breathtaking beauty that’s filled with activity, productivity and excitement. And its countless natural wonders — just waiting to be explored — will be far more beautiful than anything we’ve seen in this life:

“No eye has seen, no ear has heard, and no mind has imagined what God has prepared for those who love Him” (1 Corinthians 2:9).

And friends, Jesus will be there. We will finally and fully grasp what He did for us, how much He loves us. We will physically be with and talk with Him. We will know God as He really is, and in knowing Him, we will become like Him. We won’t struggle with sin. We will be as God intends us to be. We will be most fully ourselves. While many think following God somehow limits, inhibits or keeps us from being ourselves, the truth is, following God is the only means of becoming wholly and purely who He created us to be.

Heaven will be far better than we can imagine. And we’re called to prepare for it. We’re called to set our minds on it.  We are made holy for this life as we do:

“Dear friends, now we are children of God, and what we will be has not yet been made known. But we know that when He appears, we shall be like Him, for we shall see Him as He is. Everyone who has this hope purifies himself, just as He is pure” (1 John 3:2-3).

This is the breakthrough the Lord gave me. We are set free from a self-centered and temporal focused life — set free to really live — as we “set our minds on things above” (Colossians 3:2):  as we think about heaven, look forward to heaven, and use this life to prepare and store up treasures for the next life we will have with God in heaven.

Let’s live in the sparkling light of eternity!

You may also enjoy: